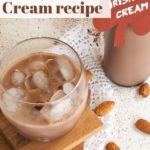 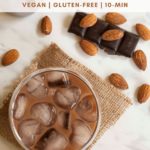 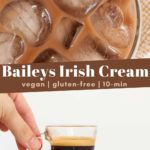 Learn how to make homemade Vegan Baileys Almond Milk Liqueur with this quick and easy recipe. All you need to do is mix Irish whiskey, coffee, almond milk, cane sugar and a bit of vanilla and cocoa powder.

It’s Emese and I love Baileys! I don’t drink much alcohol, but if I have to choose just one of all alcoholic drinks, I would choose Baileys. I even toasted with it on our wedding. 🙂 Also my husband explicitly asked me to mention that he strongly prefers wine or beer. 🙂

Table of Contents hide
1. Is Bailey’s vegan?
2. Reasons you need a homemade version
3. Ingredients you need
4. How to make Vegan Baileys at home?
5. How to drink Irish Cream Liqueur
6. Vegan desserts using Baileys
7. FAQs and substitutions
8. Want some cookies with it?
9. Copycat Vegan Baileys (Almande Liqueur)

If I think of Baileys, I think of Christmas or New Year’s Eve or St. Patrick’s Day. It is a digestive, an appetizer to serve before dinner or to toast with it. It is one of the most popular spirits in Europe, but sadly up until 2017 Bailey’s was not vegan.

However, the company saw the demand and created Baileys Almande, which is vegan.

Baileys does not disclose the full list of ingredients either on the packaging or on their website. All they say is that Almondmilk liqueur gluten-free, dairy-free, but may contain soy. It is made from among others

Reasons you need a homemade version

If you are debating whether you need a homemade Vegan Baileys in your life, these are the reasons you should consider:

We developed this recipe to come up with the best Copycat Vegan Baileys recipe. Here is what kind of ingredients we used and why:

Can you use other dairy-free milk?

How to make Vegan Baileys at home?

We have a neat little Nespresso Citiz & Milk machine*, which we bought after our first daughter was born. Still loving it by the way especially after a long sleepless night. For this recipe, we made an espresso using a Nespresso capsule called Arpeggio*. It is rather a strong to medium in intensity as I prefer to have a distinct coffee taste in our Irish cream liqueur.

How to drink Irish Cream Liqueur

I found these lovely heart-shaped chocolate molds* to make healthy Cranberry Jelly. But aren’t they also perfect for ice cubes? My Vegan Baileys just got a tiny bit more awesome.

If you like to mix it up, you can add this homemade Irish cream liqueur to other drinks like:

Here is a list of Baileys cocktails and mocktails. Sadly not all of them are vegan, but a good start to get some inspiration.

Not only you can drink it, but you can bake with it. If a recipe calls for coffee or whiskey or other spirit you can add this homemade Baileys instead. It will definitely spike up any recipe. It is a perfect addition to any chocolate-based desserts. Here are some inspiration from other bloggers. All recipes are vegan and gluten-free (or with GF option).

Can you make it nut-free?

Yes, you can use light coconut milk or soy milk if you need it nut-free. It may alter the taste a bit though. You can use dairy-free milk in combination with full-fat canned coconut milk for a richer taste, but we recommend bring it to boil and cool it down before adding it to the blender. Otherwise, the full-fat coconut milk will solidify in the fridge when you want to chill the vegan Baileys. And that will look quite horrible. 🙂

How long does it last?

Keep it in the fridge around 4-5 days, tops a week.

What kind of coffee should I use?

Of course, you can use any other cold brewed or capsule coffee or instant espresso powder, but be sure to choose at least a medium one in intensity. Otherwise, you might not be able to taste the coffee in it at all.

Well… According to Beyond Celiac, whiskeys are safe to drink for people diagnosed with coeliac as the distilling process removes any gluten. That being said I also read in several websites that distilleries might add back some “mash” after the distillation has finished or they can use a wheat-based glue to seal the barrels or there might be some caramel coloring or other added flavor that might contain gluten. So proceed with caution and check with the manufacturer.

This Vegan Baileys recipe is dairy-free and egg-free. It is also suitable for vegan, vegetarian and gluten-free diets. I think alcohol is not approved in a WFPB-friendly (whole foods plant-based) diet. It is only nut-free if you use dairy-free and nut-free milk like coconut milk or soy milk.

We have several yummy gluten-free vegan cookie recipes you might enjoy with your homemade Baileys. All of the below recipes are vegan and gluten-free. 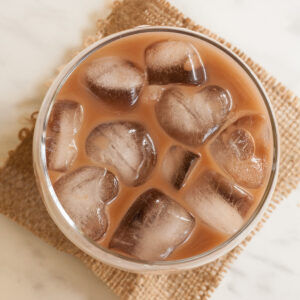 5 Secrets to Simplify Vegan CookingFree E-mail Series -> Send It My Way!
How to stock a vegan pantry?Download our FREE Vegan Grocery List

Can you use other dairy-free milk?

UPDATED:This recipe was originally posted in Feb 2019, but it was re-written a bit and republished in Oct 2021. 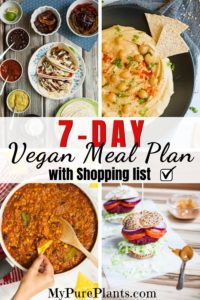 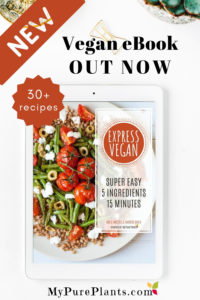 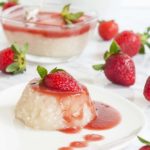 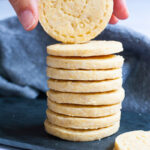 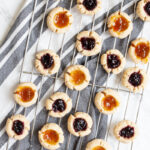 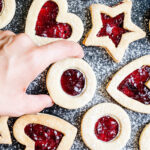 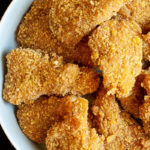 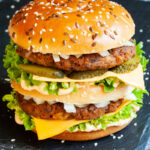 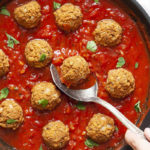 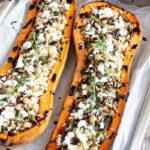